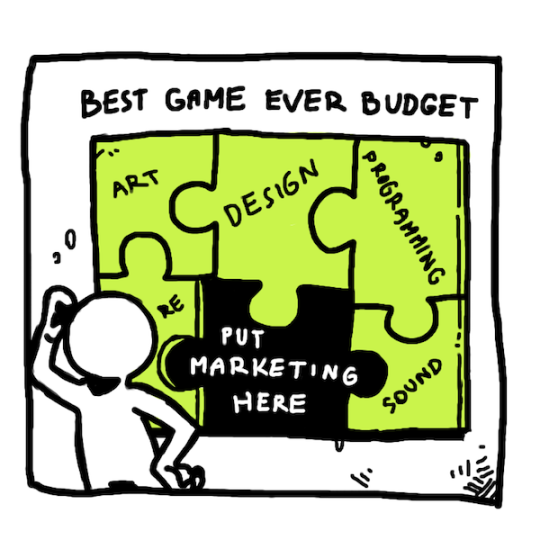 If you missed the 1st part of this post, read it here. Just to recap, here are the first 5 sins:

1. Missing the Unique Selling Proposition
2. A vague definition of the target group
3. No category research
4. Missing the F2P and premium difference
5. Launching on many platforms

6. Not having a marketing budget

If you build a freemium game, split your production budget 70-30 and use the smaller part for marketing only. Freemium is an iterative business and you have to invest in user testing, game analysis, a soft launch, A/B testing, data analysis and several tools. You should aim for a return on your acquisition investment after about 2-3 months depending on the genre, otherwise the game isn’t performing well. Also, remember that to have a profit per user, you will need at least 20-25 % to cover the overhead depending on the scale of the campaign and the size of the team.

Having a good game isn’t enough if there’s a cash flow problem. Let’s say you acquire a user for $2 and the average repayment of the investment is 2 months. Add 60 days to the pay-period by Apple and Google which means a cash flow gap of 4 months total. If you want to acquire 100K new users in a week then you need to be able to have 200K in your bank account for a quarter of the year to get your money back. Services such as Pollen VC could help you cut the waiting time.

It’s somehow in indies minds that ads are evil. For premium games, yes. But in a freemium, 95% of players won’t ever pay for in-app purchases so using ads to monetize this large group is absolutely fine. Moreover, having well integrated rewarding ads could help increase the session length and improve the conversion of paying users by giving them a sneak peek of premium features. In Ocean Blast, we have 37% of our revenue from ads using Chartboost interstitials plus video, Unity Ads and Fyber mediation. We must also say that no one argues about it in reviews either.

9. Over-estimating the power of the press

Unless you are into desktop publishing then forget about the power of the press. The days are gone when a review at TouchArcade or Slide To Play created a nice spike in sales. Most of the servers such as TA are fighting for an existence and large branding campaigns on these servers brings only about 1000-1500 clicks a day which is with a store conversion of 40% about 400-600 installs. The focus of readers has switched to Youtubers or browsing the top charts, which applies mostly to a young audience according to research by Tune. Having a review is great just for a quotation in the app’s description.

Not doing a soft launch is equal to committing suicide today. In a soft launch, you should test messaging, A/B test screenshots and the app preview video, fine tune on-boarding, level progression and monetization. Test different ads to target and understand your audience. Having good KPI’s helps you to be able to pitch the game to Apple or Google as well as secure strong featuring.

You need at least 10 000 downloads, leading to hundreds of DAU, to make reasonable conclusions and it’s better if you can get twice as many. If you split your budget between the cheaper countries such as the Philippines for measuring store conversion and retention, plus for example Canada for measuring monetization, then you will need roughly $20 000 for the soft launch. If you have a paid game, consider a free model in the selected country during the soft launch phase.

11. Not building on foundations

Many indie developers jump from one game to the next one, switching genres and losing the opportunity to maximize on existing code, mechanics and their user base. Look at Supercell as “Boom Beach” is based on the foundations of “Clash of Clans”. King and their “Sagas” are other examples. Another great showcase is from the other side of the spectrum with Ketchapp games, which are simple one tap fast-reaction games produced in a few weeks but heavily leveraging the brand, cross-promotion, and have a regular publishing frequency.

Have you made any other mistakes? Feel free to share them so other devs can avoid the same dead ends.

Thanks for funky illustrations to Jana Kilianova! Feel free to hire her for you game, post or presentation.