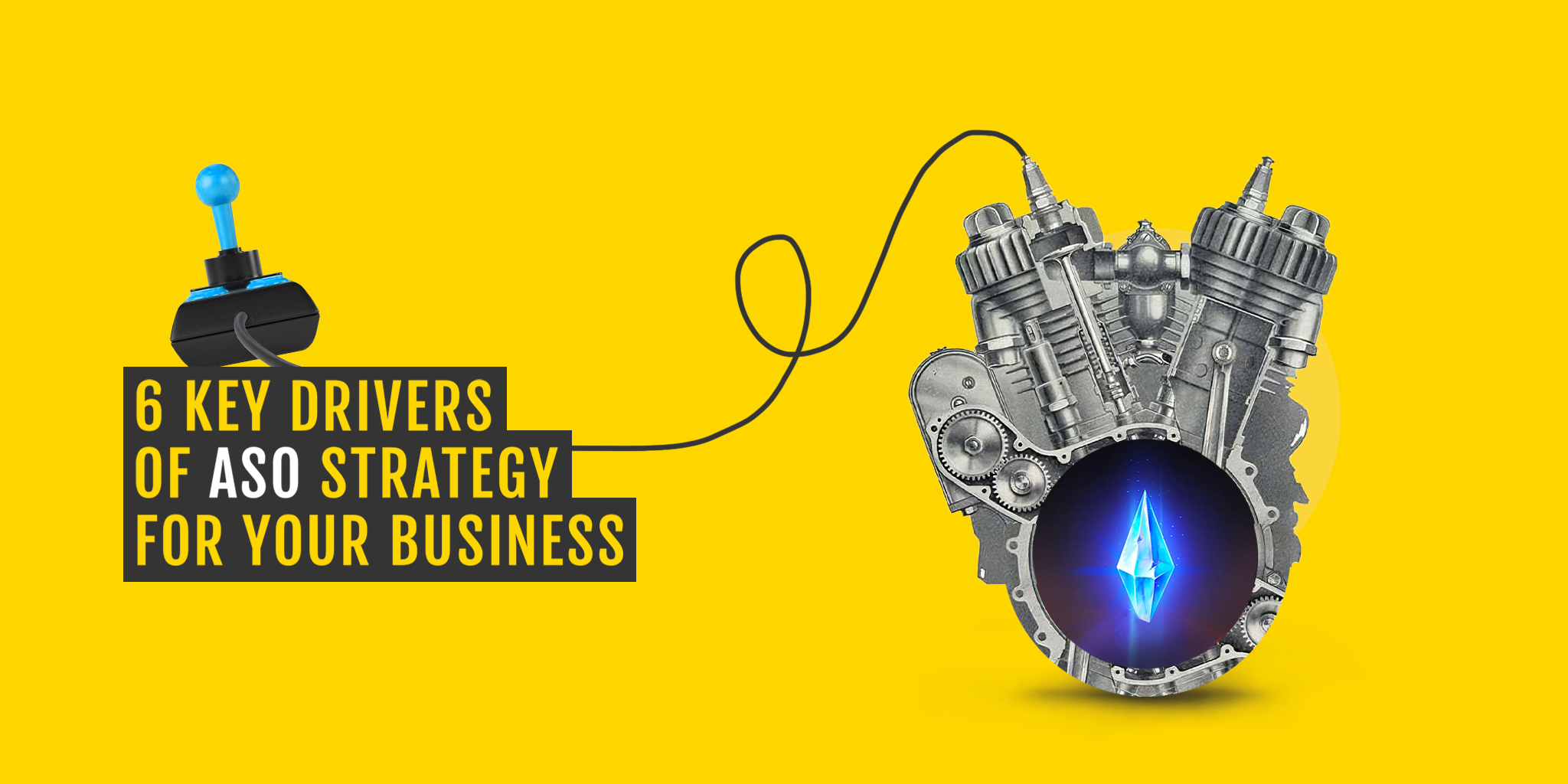 Many articles talk about App store optimization (ASO) tactics, but only a few touch the fundamentals of a successful ASO strategy. By focusing simply on tactics instead of developing an effective strategy, many publishers are spending money without seeing results.
At AppAgent, we have written widely on the subject, sharing our belief that strategy should drive tactics, not the other way round. We have identified six critical aspects of a successful ASO strategy. This article is a summary of a webinar we had together with colleagues at AppFollow in March 2020 where we described the fundamental components of a successful ASO campaign.

Why is ASO strategy so important?

So many times, publishers wrongly define their approach or set unrealistic expectations for ASO. It’s a competitive market out there, and significant numbers of companies are focusing on organic traffic optimization to target audiences. At the same time, new tools and data sources are being opened up to publishers to use.

For publishers who want to succeed, it’s vital that you understand what you can and can’t achieve with ASO, before jumping in and executing plans.

While some publishers have unrealistic aspirations for ASO, others don’t include ASO in their strategy at all, wrongly believing it to just be about keywords. 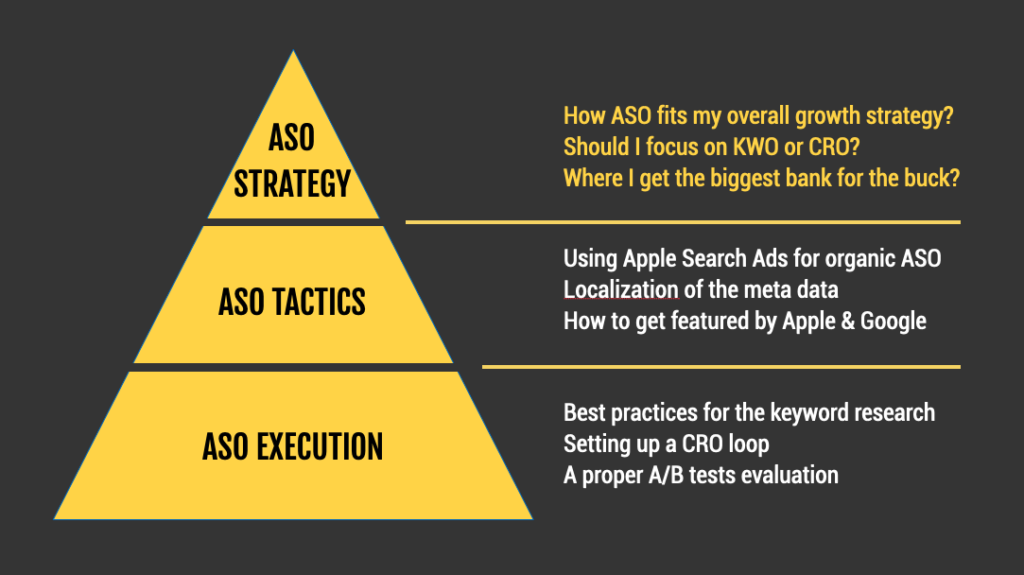 There is a big difference between the positioning of an unknown start-up and an established business. For new apps, it is almost impossible to achieve a top-5 ranking for highly competitive keywords.

As a small publisher, you also won’t have enough traffic to A/B test your store assets which you can use to improve conversions. This means you will need to begin with long-tail keywords first and maybe buy some traffic to get enough volume for your experiments.

Only later on can you aim to rank for more competitive keywords or test in specific markets. Custom store listings on Google Play will help you to aggregate several markets together to achieve enough volume for conversion testing.

For an established business, conversion rate optimization (CRO) is low-hanging fruit and can have a massive impact on growth, especially if you run a paid UA campaign. With enough traffic, you can effectively split your ASO efforts by market (or by grouping markets together).

A successful app or game will have the potential to target the highest value keywords in terms of volume, competition and relevance. At the very top, several other factors, such as product metrics, conversion rate, and ratings can influence an app’s ranking.

Part of the positioning relates to the user’s intent, specifically if people have a strong willingness to find a solution to their specific need (navigation for professional drivers such as Sygic Truck) or just to kill some time (casual game such as Merge Dragons). This defines which strategy is best for you.

The breadth of your app’s appeal will define how the size of your competition is. For example, a niche app for poker players will have a much smaller audience than a language learning app. However, having fewer competitors doesn’t mean your app will have an easy life.

Smaller markets can be highly specific, and targeting users can be expensive. The more niche your app, the less traffic you can achieve from keywords. Targeting these keywords may be costly.

The Poker Stack app, for example, fights with social casino games for users. Such businesses see huge LTV in their users and will heavily invest in paid marketing such as Apple Search Ads (ASA) to attract them.

In situations such as this, as a developer, you may want to explore options outside of the App Store and attempt to attract users through content marketing and SEO.

On the other hand, mass appeal apps compete against one another to gain relevance for a limited number of high-value keywords (‘learn english’ and ‘language learning’ in the case of Babbel for example). This can create intense competition. In these circumstances, other factors such as download velocity can play a major role if you are aiming for a top ranking position. In this situation, you must include them within your marketing efforts.

One way to avoid having to battle with your competitors is to focus on attracting users outside of the US. To determine where to target, check how actively competitors localize assets, their frequency of store listing changes, and how they rank for relevant keywords.

As well as looking outward at the market, look inward too and investigate your Average-Revenue-Per-User (ARPU), and explore the size and growth potential of each market. This evaluation exercise should guide your investment choices, and help you decide which markets to invest in Evaluating these inputs will guide you which local markets to target and whether to invest in ASO.

It’s natural that, in an overcrowded market like app stores where there is so much choice, people stick to brands that they know. Users know what they’re buying when they choose a familiar brand and can avoid any nasty surprises.

If your app already has significant brand recognition, the right unique selling proposition (USP) will differentiate you from other big players. A USP isn’t just a logo, it’s about providing clear and compelling reasons why users should prefer your product over another.

Defending a brand using Apple Search Ads might be a good approach in this situation, but you must be careful not to cannibalize organic traffic.

For starters, use less popular and long-tail keywords to grow and expand into Tier 2 and 3 markets first. By using Apple Search Ads, you will attract relevant traffic, but we recommend you focus on generic keywords instead of brand names.

A small e-commerce app won’t be able to compete with eBay for top ranking positions. Instead, you need to gradually improve your ranking, something you can achieve by synchronizing your marketing efforts into a unified strategy.

Both large and small brands can utilize some form of social proof to build and increase trust in their products. In one example, AppAgent used testimonials from well-known outlets such as The NY Times to promote Kiwi.com, leading to a 13% increase in conversion. 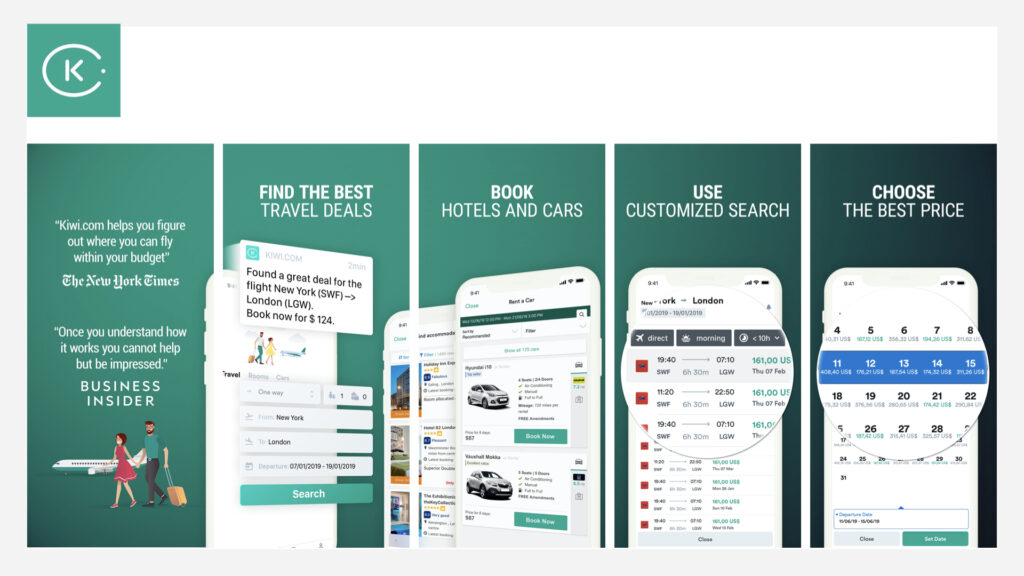 The traffic composition for an established brand compared to a no-name start-up will be completely different. Visualization will help you to understand where your traffic sources, detailing where your users come from, where the potential exists to attract more users, and how to reflect the traffic distribution in your store listing to maximize conversion rates. 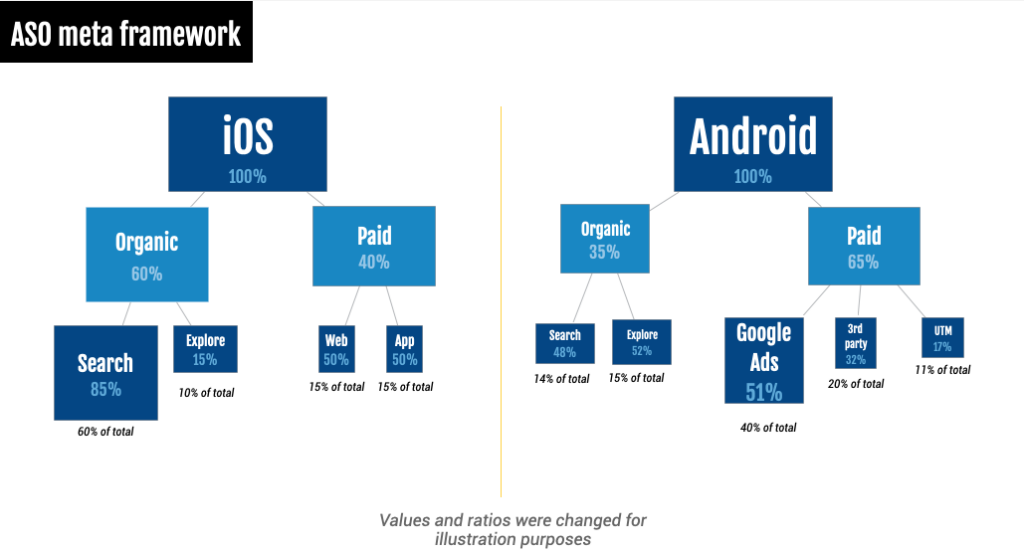 This detailed understanding of traffic sources will help you to define your next steps.

Here are two examples using the output of our ASO meta-framework above:

1. If iOS search is essential for any given app and users mostly come through brand terms, then you should add brand terms to store assets and focus on expanding search visibility to more keywords.

2. On Android, if Google Ads are an important source of traffic, ensure your best-performing ad creatives and store assets match.

For UA and ASO to work together effectively, you can either start from your current ads (an established business) or ASO (a start-up launching a new app).

To achieve maximum gains, think of the store as one part of a much larger funnel: your ad > store > onboarding > product.

The user intent and the awareness of your product will differ on a case-by-case basis. As a result, you must reflect – using information generated through your traffic source analysis – on which of the user journeys produces the best users and optimize for it. 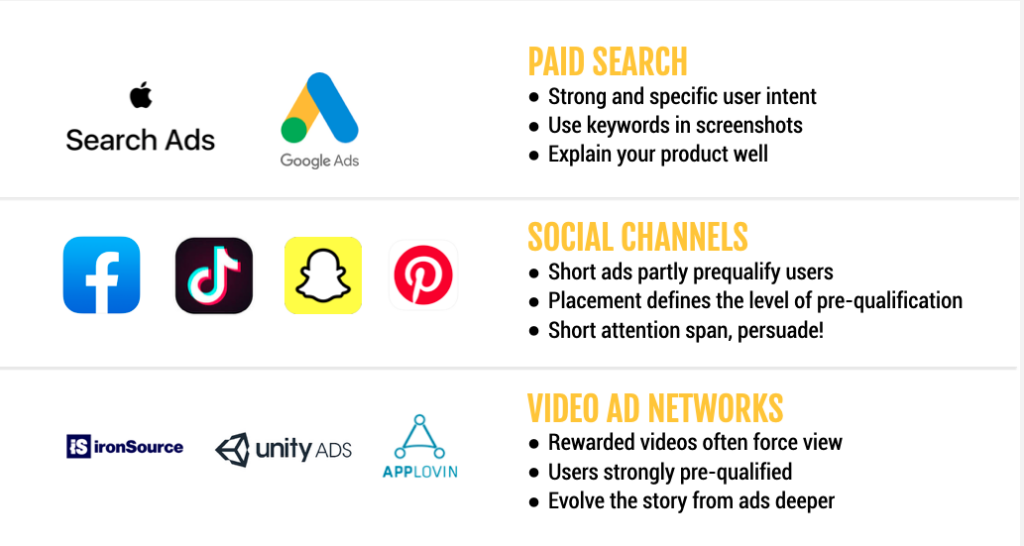 As the store page is an important step in the user journey described above, remember to track changes in the metrics of your UA campaigns after updating graphic assets on the store page. The increase in CR after a series of successful store page A/B tests may bring you insights that you can use for future UA campaigns.

Outside of conversion rate optimization, paid UA is also closely related to keyword optimization. How? You can – and should – use an attribution tool such as Appflyer or Adjust (more on selecting the best mobile attribution tool) to understand the revenue per keyword while running specific data collection campaigns using Apple Search Ads (ASA). Only then will you know which keywords to target in ASO. It may also identify some worth paying for with.

The funnel should be based on the key visual elements and creatives that have proven to be effective during testing. It could be a certain hero, environment, or object that is the most successful – but don’t make decisions on what looks good. The data generated from UA and store experiments should guide you. For an example of how this works, see how the dragon repeats at every step of the funnel of Empires & Puzzle. 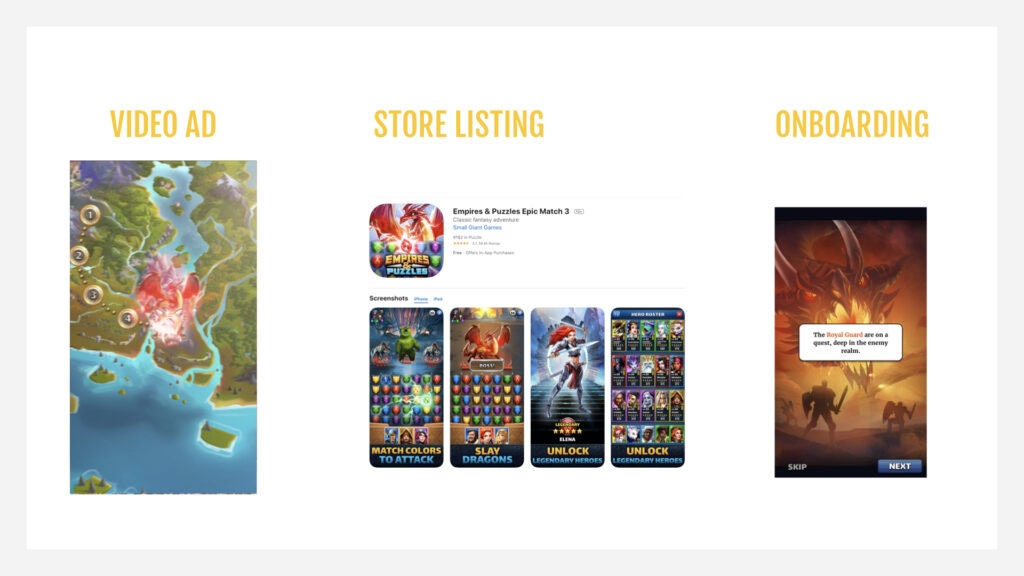 You can test potential app store creatives on other paid channels such as Facebook. The benefit here is that you can get results very quickly, broken down into various user segments.

If you’re short on budget, you could begin with Google Play experiments to test creatives lower down the funnel, before using the winning concept in your UA campaigns.

Successful CRO experiments will bring you additional organic installs, but they will also lower the CPI of ad campaigns. Here you can find some tips how to increase organic mobile installs – not only in seasonal period.

In conclusion, consider the six key drivers of ASO strategy first. Focus on these six pillars before you bury yourself into ASO tactics and activities.

Depending on your app, your brand and your business, there are commonly only a handful of activities that will deliver a positive return on investment (ROI) at any given stage.

Doing these right is crucial. Simply put, you should do less, but do it better!

🤝  Get help with the launch of your app or game, growth strategy, app and marketing analytics, ASO, user acquisition, video and playable ads production by reaching us at peter at appagent dot co.

💡  Join in our team! If you’re a Mobile Marketing Manager, or a New Business Manager, we’d love to meet you. Take a look here. 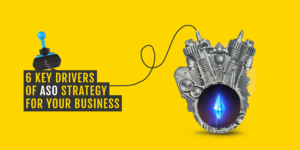 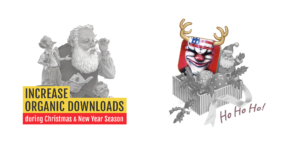 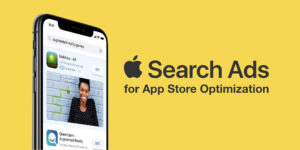