How Apple features apps and games is marred with rumors and a great mystery. I bet you’ve asked the question “Why the hell this app…?” many times in the past. With over 1,552,996 active apps (Pocketgamer stats), promotion by Apple is one of the keys to success. Yet only a fraction of devs win in this lottery.

Recently, I had an opportunity to speak with Matt Monday (LinkedIn profile), the third member of the App Store Editorial Team. Matt started there back in February 2009 and worked for Apple for the next 2 years. With a background in data analysis and a passion for games, Matt was responsible for the selection of featured apps on a weekly basis. Later, he decided to start his own startup called “Karma Store” and today he works at ESPN. Other than his daily job, he also became an advisor for a mobile app development shop called “STRV” located in Prague, Czech Republic with offices in San Francisco and Los Angeles. David Semerad and Lubo Smid from STRV invited Matt to Prague where he had a great speech in front of a big crowd. Here is what Matt shared with the audience in his talk titled “Inside the Apple App Store” and later during our chat at the after party.

You’ve heard it million times before: create a great app. But what it actually means? It’s not just making the app look good! As the late Apple co-founder Steve jobs put it, “That’s not what we think design is. It’s not just what it looks like and feels like. Design is how it works.” So, rather than focusing on the graphic design, focus on the user experience design.

Also, don’t reinvent the wheel. Apple designers already set many rules and best practices. Therefore, it makes sense to follow them. In fact, the more “Apple-ish” you can design your app, the better.

Another very important point is the timing. If you use the latest and greatest features of iOS and Apple hardware you significantly increase your chances of being noticed. It’s more important to keep your app up-to-date with the latest OS rather than worrying too much about supporting older versions. Pay more attention to refreshing your app and update to the latest technology, rather than spending too much time redesigning older versions. Always try to build a universal app and if it makes sense for your business, you should keep it exclusive for Apple for some time.

Michael Ehrenberg, an App Store marketing manager, was speaking at the Mobile Gaming conference in May 2014 about the same topic as Matt in Prague. Both confirmed that featuring is a manual process. “It is 100 percent hand-curated,” Ehrenberg said. The editorial team follows opinion leaders, reads forums, visits technology and gaming sites, checks results of competitions such as Indiecade or IMGA.

What it means for developers is to communicate early and build awareness in advance before the launch. The editorial team is completely behind the wall so you should approach a local Apple Developer Relations manager and show a prototype of your game early. Show it again when it’s closer to launch so that Apple’s team can feel like they’ve been in the loop and can plan for a coordinated launch. You need to show a game weeks before it is due to come out, not days. And how do you find your local contact? Go to WWDC and chat with Apple guys after the sessions. Also, network with developers in your country, successful teams probably already have their own contacts.

3. How the selection process works

Now comes the most interesting part. It’s impossible to go directly to the editorial team. The team of curators themselves try not to meet too much with developers and get influenced by them. The only way to get to them is through your local dev relations manager who could nominate your app or game. Otherwise, you have to be really lucky and get contacted by the editorial team directly if you stand out from the crowd.

The selection process could pretty much be described as hard manual work. Editors scan through all possible sources and preselect what’s new, updated and worth the attention. All those apps are represented by the icon on a large grid. Then the editor truncates the list. Just by watching icons and names, the editor removes all icons which doesn’t match the quality level expected by Apple. Next, the editor removes a bunch of apps based on their screenshots which represent how the app works. Poor graphics, messy UI, misspelled screenshots and more are all reasons to delete the app from the list of potential candidates. Then the narrowed list goes into a third round based on the app description. Is the text clear? Does it immediately explain the value to the customer? If no, removed! Sound familiar? Sure, because this process basically mimics how an ordinary App Store user behaves.

The shortlist, then goes under closer inspection and the name along with the track record of the developer playing a significant role. The App Store team is global and regional teams select content to feature that is relevant on a local basis. College basketball apps are featured in the U.S. during March Madness but those apps don’t appear in the featured spots of United Kingdom’s store. Also, some marketing is seasonal. You may have to tell Apple about a Halloween game promotion about a month before the day.

The quality of the app is no doubt a critical factor. But it appears marketing the game prior to its launch is half the battle. Apple invests in featuring you, you should also invest in a PR campaign, trailers, a great icon, persuasive screen shots and a perfect copy. Your game should have good reviews from the outset and you should monitor what is being said about your game in forums and reviews. Last but not least, if you’re going to create ads for your games, make sure they can see them in Cupertino, California, where Apple’s headquarters is located.

If you do believe your game meets all those criteria, send an email to appstorepromotion@apple.com for promotional consideration. Provide the following information.

You can also send an email to appstoremarketing@apple.com for the review and approval of outbound app marketing materials such as website or mobile ads. These teams want to know about the game, track its progress and evangelize it within Apple. Good luck and keep creating awesome stuff! 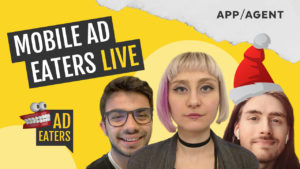