How Much Does it Cost To Get an App Featured by Apple? 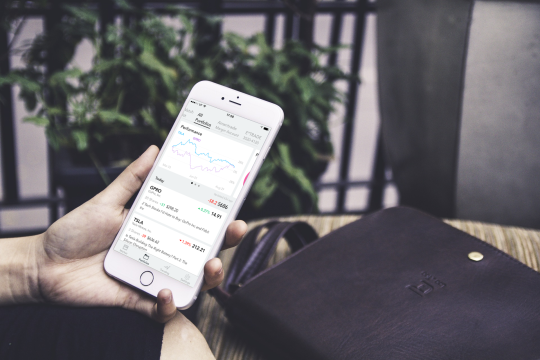 Once, in a meeting with a new fin-tech client, I was asked how much it would cost to get a new application featured in the App Store. At first the question seemed silly to me, but later I understood how perceptive it actually was.

In reality, you can’t buy the spot with cash. The only way to achieve it is with the quality of the product you have created and with the investment that you are prepared to make.

In this article, I’d like to show you how you can put together small pieces of work which could help you in getting featured on the US App Store home page. Talking about money and impact, with our help we generated an uptake in users that they would have cost the organization around $50,000 in user-acquisition. All within one week… Here’s how we did it.

Built on a solid foundations

Nine months ago, AppAgent started working with a San Francisco based startup previously called Trdr [:Trader:]. It’s an iOS fin-tech company founded by Adisorn Ratankovit, who served as head of technology at Investools, before the company was acquired by TD Ameritrade.

Trdr notifies investors about the relevant market changes and helps them to make better informed investment decisions. The tech science behind the app is proprietary SignalRank technology which scans thousands of market events and filters only the most relevant information affecting a user’s stock portfolio.
The main competitors for the app are news apps such as Bloomberg or Yahoo Finance. Because the app integrates several brokerage accounts it also competes with brokers as well.

The definition of who’s and what’s

Soon after we started cooperating back in November 2015, Adisorn jumped on a plane and came out to visit us for an intense week comprised of business planning and engagement in Prague.

The main task was to clearly define the target group and product positioning. The app looks like a news app as well as notifications app and an investment portfolio reader all in one. We also laid down basics for changes in the UI and for upcoming acquisition campaigns. Altogether, we’ve had 10 meetings and completed tons of work while at the same time adding dozens of new tasks to the list.

The product is the king

We at AppAgent always start on any project with a proper analytics setup and evaluation of the onboarding. So far, we have completed two iterations and two more are planned in a near future to get above the 85% rate of the finished onboarding process.
To improve performance, we’ve suggested tweaks on the main screen of the app to emphasize the daily performance of a trader’s portfolio. An iPad version of the app was partially released in June with a complete redesign planned for this summer.
The main change which we’ve suggested that our client make was to rebrand the product from ‘Trdr’ to ‘Tradewise’. This makes, the name easier to understand, and more importantly helps us to build a brand. As part of the process, we have workshopped over 50 new names. From those 50 we tested five and then picked one of the two most up-voted.
This helped us clarify the proposition. The new name emphasizes the target group and value provided by the app. Of course with a new name came a new logo in addition to a new app icon.

We ran numerous low budget campaigns ($1-2000) where we tested different methods of targeting and 16 different creative executions of Facebook ads altogether. Our work resulted in a 7x decrease of the initial CPI which our client had before we jumped in.

Part of this was the optimization of the store listing where we tweaked screenshots, the description and tested a tagline which was rich with relevant keywords. The conversion increased by 10% and definitely helped to optimize the CPI of paid campaigns and we’ve also engaged a steady stream of users who come from organic searches.

Once we reached 5000 downloads and a rating of 4.5 stars, we knew the app was ready for “show time”. However, we had to bring an additional “Reason why” from Apple’s perspective to the table. That is usually demonstrated by the implementation of their latest technology. As a result, the developer of Tradewise integrated a 3D Touch for quick access to the most important dashboards and a notifications widget which makes access to the key figures even quicker.

Armed with good numbers, clear positioning, a nice looking store listing and a pair of new iOS features, it was time to pitch the app in person to a regional dev relations manager. Soon after the meeting, we got a response from the App Store Manager requesting more details with two good tips for additional features recommended by the US editorial team. This positive signal was confirmed a week later when Tradewise appeared in the “New Apps We Love” section on the US App Store homepage as well as on the “…and profit” homepage collection and a day later in the “Stocks & News” section of the Finance category.

Such a significant featuring (for what could still be classified as a niché app) resulted in a huge spike in downloads. Two weeks later, we were still seeing a nice long tail after the home page featuring ended so there is no doubt that all of that hard work paid off for both Tradewise and AppAgent. This was a boost for the upcoming months where we will further improve the app and work on reaching more US stock traders.

I hope this case study answers how much it takes to get a prominent spot from Apple. What wasn’t mentioned are the years in business which we all spent learning and building our relationships. As Steve Jobs said in his commencement speech at Stanford, it’s all about “Connecting the dots”.

• Clearly define the purpose of your app
• Understand your target group and its needs
• Get enough downloads to analyze and improve the app
• Reach a rating of 4.3 stars and above
• Implement the latest Apple technology
• Pitch the app to Apple, focus on the sections where the app fits the best

Note from Nov 9/2016: Tradewise is again featured on the US home page in the section “Enhanced for 3D Touch”. This greatly illustrates how integration of Apple tech helps to get visibility in the store.