The massive impact of iOS11 on App Store featuring 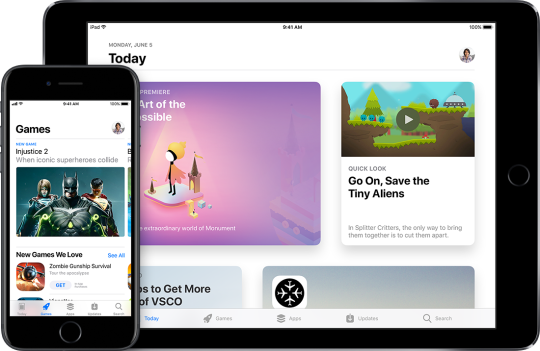 Today’s post is part of my guest chapter from an upcoming book called “Advanced ASO” by Moritz Daan and Gabe Kwakyi. I cover the whole featuring process, all tips & tricks learned in past 7 years with dozens of examples and data. The post below focuses on the impact of iOS11 on featuring.

The book was released in August 2017 and you can order on the official ASO Ebook website.

A place everyone wants to visit daily

Apple’s services business generated $26 billion in sales in 2016 and a Credit Suisse projection sees it growing to $52 billion by 2020. Phil Schiller, the Senior Vice President of Worldwide Marketing at Apple Inc. is the man behind the App Store and its $1 billion growth in 2016. He leads efforts to keep the revenue trajectory positive and to do so, Apple wants to transform the App Store into a place everyone wants to visit daily.

The reason behind this is obvious: ComScore study in the US from June 2016 shows 49% of users haven’t installed any app in the past 3 months. The same trend is visible across all Tier 1 countries where the interest in apps has reached its peak. AppAnnie claims in a study from Q1 2017 that the average US mobile user opens about 10 apps per day. This is a clear proof people are happy with their existing selection of apps on the home screen.

Besides ever-lasting search issues in the app store, the hyper competition of nearly 2.2 million apps is causing “app-sickness”. If you opened the App Store on your iPhone 6 before iOS11, you instantly became overwhelmed with 14 apps and dozens of others if you dared to explore the page more.

The golden rule is that the more choices you have, the less likely you are to pick one and this was something that led Phil Schiller and his team to completely change as the biggest digital store in the world got a so-called “facelift”. After all, the store re-design is a low hanging fruit compared to the complexity of fixing the app search engine.

Since early 2009, Apple has had experience with editorial content. The human factor became a greater weight and the iOS11 revamp simply crowns Apple’s efforts for full control over the apps that users discover in the store.

The ambition of creating a daily habit is rather exaggerated as I can’t imagine that the App Store will replace the popular Facebook feed or procrastination on Twitter. Yet the new App Store landing page called “Today” is designed as a news source combining new releases, interviews, guides and other sources. All-in-one scrollable pages and immersive content matches the design of the Apple Music Store and fundamentally changes the look & feel of the store compared to a hand-picked news stream.

For users, this simplification and cutting down choices will be quite beneficial. A more immersive presentation of the very best apps, games, new types of content covering most popular products and daily news is easier to digest.

For most of the developers, I dare to say the change is a disaster. The gap between top tier publishers and “the rest of the world” will broaden even more. 4 out of 5 tabs are mostly curated now, even search with the last remaining tab being Updates. In a direct comparison, the iOS 10 landing page gives apps a bigger chance of being featured, as there are 11 different editor-picked categories an app can be featured. After the iOS 11 update, only a few selected apps remain on the landing page making the battle for visibility even more fierce.

The trend where Apple gains control over content distribution (think of Apple Music) is not surprising but terrible if developers haven’t got good relationships with their reps. Those who have will benefit from the visibility even more than before because the average downloads per featuring slot are for sure going up thanks to fewer spots and more prominent placements.

Today, the only certain thing is change. Developers and marketers have to adjust and here are my two cents on how to increase your chances of getting into the spotlight in the new App Store:

It’s already 35 years since Al Ries and Jack Trout published a book called “Positioning: The Battle for Your Mind”. In essence, you as a company and your product need to stick to a unique and very coherent statement about who you are and what you offer to people. Look at ustwo, State of Play in the indie game dev scene or Kabam and Wooga among the big publishers. Each name automatically triggers a specific “image” in people’s mind. My triggers say “visual images, hand-made games, big IPs and casual games for women”. This applies to products as well.

Having such clear positioning is critical on the mass-market as editors in Cupertino will focus on publishers and games which have stuck in their minds. Human beings have limited “mind slots” available, so do whatever you must do to be recognizable and consistent both in your production and communication.

The Today tab in the new App Store becomes more a place for news than a store. My expectation is that being able to tell a story in your pitch and even offer top notch content such as Behind the Scenes material in the form of a video or visually appealing How-to-play guideline could increase your chances for being featured. Basically, we’re going back to the old PR days where the main goal – in the pure form of a PR – is to offer a great story in an attractive package to media which is creating leverage by reaching the desired audience.

I can imagine that new businesses evolve around this opportunity and modern creators will bring ideas on how to present the developer and the app through content. If we count on people’s laziness and ubiquitous time pressure, having one go-to place where such content is published regularly will be a massive help for an editorial team.

Having a good relationship with a dev relations manager or a store manager is now more important than ever. The simple advice here is to treat Apple representatives as your most valuable business partners: with respect and have their welfare in mind. Offer to test your product in advance, collect feedback (listen and don’t defend), suggest own and exclusive content, ask about their recommendations on the best use of the new Apple technology. Last but not least, work hard to convert the best suggestions and put them into reality

Most developers are by nature introverts but take any opportunity to meet your counterparts in person and ask them what YOU can do for them as well as where they see new opportunities. Be prepared to be rejected or ignored as maybe you don’t have something truly fantastic or they are just busy at the moment. And always deliver the best you can because that’s how you build trust.