This is part seven of the Mobile Marketing Creatives Series. In ten episodes, we aim to provide insight and inspiration on creating thumb-stopping visuals to promote your app.

–      How we consume video ad content, and what it means for advertisers

–      Which 6 recommendations on mobile ads we often hear from Facebook

While part 5 in our series focused on generating a good creative direction and developing catchy content for mobile video ads, this time, we focus on creating a narrative for your ads and describe some design best practices.

Once you have the general concept of a video ad in mind or even sketched out, it’s time to think about its structure.

First, examine the historical data of your user acquisition campaigns. That should help you to identify which network and placement drive the highest traffic. There’s a big difference in the way people “consume” your messages when they appear on platforms, such as Youtube pre-roll, Instagram Stories, or the Facebook feed .

Feeds – If the most frequent placement is a feed on FB or Instagram, use creatives that either quickly communicates your message or grabs people’s attention in seconds.

Non-skippable mid-roll or pre-roll – Short video between 6 to 15 seconds is advisable to keep your audience interested. Sound (music, SFX or dialog) can be effective.

Skippable mid-roll or pre-roll – A 5-second ad will be seen by most viewers. A 15-30-second ad will reach just 10% of people – or less. Convey your message clearly before the skip button appears!

Stories – This is a fast-growing format that can be sequenced to create a more engaging and involved narrative. Quality isn’t hugely important, but music presents a massive opportunity.

It’s clear that each ad placement commands a different attention span from viewers. Your ads must respect and reflect the differences in channels to maximize their impact.

Analysis of active vs passive attention for 8 ads 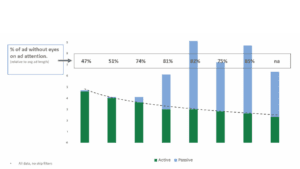 Because attention peaks in the first three seconds, users often move on to something else shortly after, so you must communicate your main message instantly. Don’t be fooled, putting longer ads on doesn’t ensure you’ll demand more attention. It just gives you more wastage (inattention).

“The human brain needs less than 0.5 seconds to engage with mobile ads and trigger a reaction.”

Source: Cognition Neuroscience Research project, “The Need for a First Second Strategy”, completed by the MMA with The Advertising Research Foundation and Neurons Inc

Working regularly with Facebook has given us a detailed insight into the platform. Here is a list of Facebook’s frequent recommendations.

Think of the structure of the video as an iceberg: what’s visible is the main message that occurs within the first 3-5 seconds. Only then should you dive into the details and add more meat on the bones.

An ad for a trucker navigation Hammer uses text overlay to set an expectation of what comes next.

Unlike traditional TV advertising, on mobile, you should reverse the brand reveal (logo, spokesperson, company color) and show your brand early. Why? Established brands can immediately create a connection with fans. For others, exposing the logo at the beginning of an ad helps build awareness and ensure a return on investment, even if the user doesn’t engage with the ad.

Prominent branding and the distinct king character create an immediate recognition of the game.

Facebook usually recommends videos that are no longer than 15 seconds. In some cases, it suggests videos are as short as 6 seconds. This duration works nicely in Stories and pre-roll placements.

4) Use feed-friendly formats for the ads, e.g., vertical

Scientiamobile, the mobile device intelligence experts, established that 82% of visitors to video-centric websites hold their smartphone in portrait orientation. It’s no surprise that ads for Facebook are typically in portrait (9:16), rectangle (4:5), or square (1:1) formats. Stories has some specific features such as the swipe mechanic. You can find detailed specifications in Instagram Stories Cheat Sheet.

Kiwi.com ad specifically for Stories uses graphic elements that people frequently use by themselves.

5) Design the ad for sound off

Use visual storytelling and delight users with sound. Using text and graphics to deliver your message is critical and is especially helpful in the first couple of seconds. If you use dialog or speech, add captions too for users who may have their sound turned off or low.

The Recolor ad works nicely without sound, but it’s even better with music and SFX on.

Try visual techniques that surprise users, such as timelapse, slow motion, split-screen, 3D elements, etc. Test what content works terms by using different motivators to brainstorm new ideas. But don’t get stuck using a style you’ve used before. Our advice is to iterate and be innovative.

One of the most successful ads for Clash of Clans from AppAgent’s creative team plays with a visually catchy rewind effect.

7) Connect the Call The Action to the motivator

Experiment with a call to action that’s connected to the motivator you’re addressing in your ad. This could be “Upgrade Your Troops and Win” for a strategy game, “Help her” for a mysterious hidden object game or “Order with free shipping” for an eCommerce app instead of classic “Download now”. By being specific, you’ll achieve better conversion rates!

A CTA “We are waiting for you” in Cats & Magic ad is connected with a motivational driver to care for others.

For your convenience, here is an overview of the most frequent creatives dimensions. 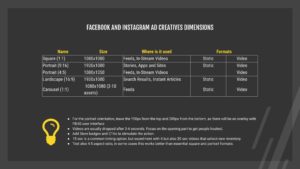 The Google checklist overlays in many ways with the tips above. However, it’s worth sharing a few fresh points to integrate into your ads, such as a recommendation to zoom key elements of the app or game interface and leveraging emotions.

1)  Use the navigating hands

Featuring an app in use helps consumers to understand what its value is. By showing hands navigating the app, the viewer can understand exactly what’s happening. The same principle applies to augmented visuals, where you can, for example, add graphical labels to describe functional benefits.

After the opening sequence of your video ad, add emotions, show a plot, and develop the story to hook your audience. The twist should come early, before you lose the majority of eyeballs.

There’s a strong start, a surprising twist, and a ton of emotions in the Merge Mansion TV ad.

3) Design to be seen

Zoom into the app or game, enlarge key elements of the app UI, clean the gameplay from unnecessary elements and increase the contrast.

See an extremely simple and well visualized gameplay in another ad for Tiles & Tales.

4) Add a strong ending and direct Call To Action (CTA)

Every game ad must have a strong plot twist, use humor, have a specific CTA, leverage a favorite in-game character. New games should use the search field to visualize the name of the game.

Check out the strong CTA connected to the social motivator in the Clash of Clans ad.

Here’s an interesting tip that closes the loop between our first chapter of this Creative Series on how to design ads with placements in mind and this one:

Google recommends that you leverage influencers, celebrities, and more CGI (cinematic) ads if they perform well on Youtube pre or mid-roll placements.

As Google offers a wide variety of ad placements and formats, you should follow a simple rule if you’re seeking to scale your campaigns: produce all possible formats and durations of all videos.

By doing so, you can unlock more inventory and give Google’s algorithm an opportunity to find you the best users whenever they are.

For your convenience here is an overview of the most frequent creatives dimensions. 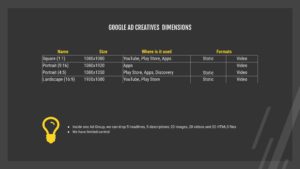 Once you have developed a concept for your ad, think of the context in which people will engage with the message you want to convey.

Bear in mind that the first three seconds are make or break, dictating whether it will lead to action. Your narrative should be the opposite of that used in TV commercials. The most important message must come first, after which you can develop the story.

You must accept that the average user will pay little attention to your ad. We know that nobody watches an advert from start to finish with total focus. So, you must keep visuals clear, simplify the interface, enlarge important elements, use illustrated finger tapping on buttons, and communicate only one message per ad!

Once you’ve produced a master ad and it shows potential during initial performance testing, clone it in all possible aspect ratios, lengths, and formats to unlock the largest-possible inventory and acquire the best users. 🚀 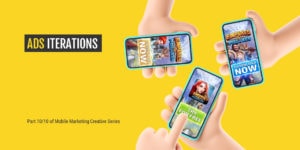 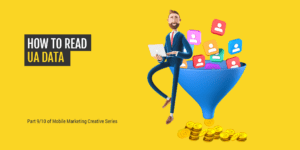 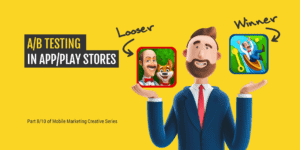 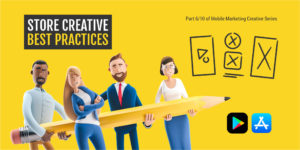 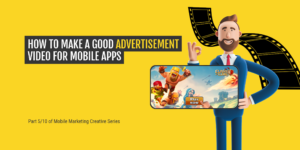 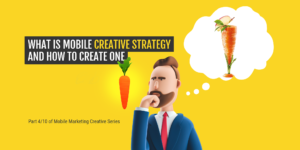