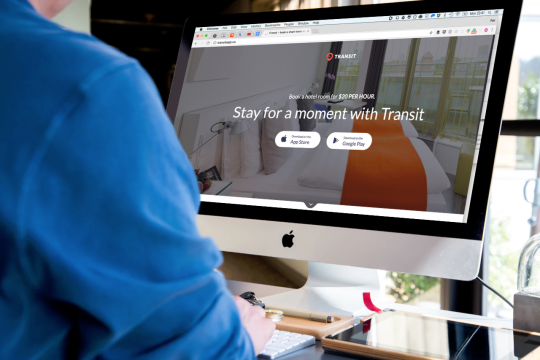 As a former startup founder, I have jumped at too many poor ideas and spent enormous amounts of time and effort developing new ideas, products and apps that ultimately no one cared about. Naturally, I explored how to eliminate uncertainty, finding markets with low costs and high potential. The Lean Startup methodology provided me with a functional framework to help me develop new ideas and approaches to business.

To illustrate the benefits of the Lean Startup strategy, I want to present three interesting experiments we ran at AppAgent in the past year. The goal is to inspire you. It may also help you to save both money and time when pursuing your new app ideas.

Experiment 1: Can we disrupt the hotel market with Transit?

One of our US-based clients approached us to test a new and appealing business idea: hotel accommodation that is sold in hours, not nights. It has broad appeal, but the concept is particularly interesting for airline travelers who may have layovers between flights or need to do some work somewhere more comfortable or private than an airport café. The product approach was “mobile first” as the service follows the same day booking trend.

“A significant number of consumers are booking hotel rooms only hours leading up to the start of their vacation.” -Traveltripper

We suggested a “Fake-it-before-you-make-it” strategy for our client. Within two weeks we created a new brand called “Transit” and developed a microsite.

The website had App Store and Play Store badges, but the links took the visitor to an email capture form. The AdWords search campaign we created to test the concept’s viability targeted Bangkok and Amsterdam, the two main transit hubs in Asia and Europe.

We decided to measure four specific KPIs: the CTR of ads; CPC; store button clicks on the microsite; and email signups. With a CPC of $1.32, 9% clicks on store buttons and expected store conversion of 40%, the estimated price per install came in at an astonishing $36. And that’s only for an install, not a booking!

We quickly realized that even if we were able to optimize the campaign and reach customers at half of that price, we were far from the break-even point. Our pricing was based on $20 per hour, with an average stay of four hours – that’s $80 per booking. Based on initial talks with hotels we quickly discovered that our profit share wouldn’t cover acquisition costs.

By taking this approach to testing, it cost less than $6000 and just one month to find out that Transit isn’t a viable business idea because it would operate with high acquisition costs but low margins.

Tapito is a news aggregator which allows users to create personalized content streams. At AppAgent we ran an acquisition campaign for the app in late 2016 which revealed a poor conversion rate in the Play Store from most creative treatments. The only exception was a video explaining the core functionality of the app. This led us to the working hypothesis that people simply didn’t understand the benefits of the app from the store listing.

Following Lean Startup’s “Get out of the Building” motto, we spent a day on the streets of Prague showing the app’s store listing on a mobile phone to about 30 strangers. We asked them a selection of questions including whether they read news on their mobile, what they understand from taking a brief look at the Tapito’s store listing etc.

We discovered during our investigation that several surprising facts how people behave in app stores.

Users only look at the main banner and name of the app, they never enlarge screenshots, very few swipe screenshots, and no one botheres to expand the description.

Transforming this insight into action, we needed to develop the perfect tagline explaining the app benefit, sell its functionality in a visual form in the main banner, and design screenshots the way people are able to “read them” – even as thumbnails. Also some benefits – which had previously been hidden, or under-communicated – such as offline reading were among most appreciated by our test group, and therefore deserve to be included in the store listing.

Once we returned to the drawing board we designed a range of new screenshots and main banners which are now being tested using Google Play Experiments.

Experiment 3: How can we monetize Tradewise?

Tradewise is an app that notifies stock investors about relevant market changes, helping them to make better and more informed investment decisions. The US-focused service has been free for a long time, but the data revealed a potential form of monetization in the frequently used Trending section, which was opened in average every second visit. The client came to us with a concept for a more in-depth paid feature set based on this insight.

Before we coded the entire functionality we looked at a custom data export which the folks at Priori data prepared for us. Even with a small sample we were able to get a baseline for subscription churn rates in the finance category in the App Store. The second step was creating an in-app offer announcing the new feature set. The trick was, we hadn’t coded a single feature yet at this stage!

The trick was, we hadn’t coded a single feature yet – we’ve only measured clicks on CTA on the fake page!

We’ve measured clicks on the ‘Try now’ button which expanded in the email sign-up, communicating the subscription price of $4.99. The following test had a new price tag of $9.99 and revealed a low price sensitivity typical for the US financial market. With these numbers we’ve updated the initial business model and with an LTV between $3 to $6 agreed on the get go. The dev team coded the functionality and released the premium package about a month ago. The initial subscription ratio matched “fake test” metrics and confirmed the relevancy of our approach.

This is just a small insight into what it’s possible to test with low costs. If you’re interested in learning more then check out these 7 Lean Experiment Techniques or feel free to reach us to consult your specific case.

And remember, then it comes to testing your new business idea the thing first to learn is to “fake it, before you make it”!